Today is the birthday of Nelson Mandela, Mandela Day, or according to his tribal honorary title: Madiba Day. And even though the media as well as the South African presidency were relatively quite about Mandela’s health condition the last days, punctually to his 95th birthday today they released the good news: Nelson Mandela’s health is steadily improving.

Mandela was admitted into a hospital in Pretoria in early June because of a recurrent lung infection. Until today media and the presidency, who takes it on itself to be the only reliable source on Mandela’s health, described his condition as critical but stable. Meanwhile his family was in an open row about his legacy and potential burial side leading to tabloid titles like this: 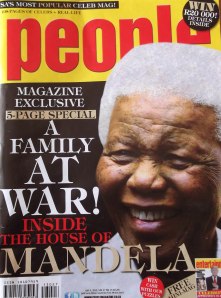 So: Good news was long overdue. Presidency spokesperson Mac Maharaj declared in a statement: “Madiba remains in hospital in Pretoria, but his doctors have confirmed that his health is steadily improving.” And president Zuma said: “On behalf of government and all the people of South Africa, we wish Madiba a joyous 95th birthday … We are proud to call this international icon our own as South Africans and wish him good health.” It is somewhat of a curiosity that marks the fight over Mandela’s legacy that not only his family but the political leaders try to utilize him for their own purposes, or as my co-author for 20One Magazine lately wrote, they are playing the Mandela card: “The African National Congress (ANC) is in deep problems facing accusations of misconduct in office and bribery. Especially South Africa’s president and ANC leader Jacob Zuma, who in his political career faced numerous allegations among them rape and corruption, is in much distress. Many of these charges have been declared unlawful or were dropped, he remains a controversial person though and many see a tendency towards secrecy and authoritarianism under his government. Mandela seems to be his and the ANC’s last resort. Commentators go as far as saying that producing the Mandela card will play a central role in the upcoming election campaign.“

Until today it seems not only the ANC but South Africa in its entity is struggling to find a worthy successor for Nelson Mandela, clinging to the hope he might last a little bit longer. And of course one may ask: Is it a nice gesture or more of PR campaign when president Zuma visits Mandela on his birthday in hospital.

This year’s birthday also marks the 15th anniversary of his marriage to his third wife Graca Machel. Meanwhile his second and ex-wife the notorious Winnie Mandela spoke this morning in a radio interview on Radio 702, telling that Mandela’s 95th birthday was “a gift not only to the family (…) but to the nation.” At the same time she declined that Mandela’s death would lead the nation to its doom. “The country will solidify and come together”, she said.

Throughout the Media, not only Africans but Europeans as well, Mandela’s birthday was featured as the number one theme in Africa. And that did not only include the celebrations or his health issues.

The “Daily Maverick” today for example dedicated a whole article to Mandela’s clothing through the ages, “Chronicles of Chic: Mandela, man of style”, something that in the first moment sounds strange but is an article worth reading, explaining how Mandela has always used clothing to make a statement.

And above that the article includes Mandela’s first ever television interview:

Apart from the political and for some personal struggle about the Mandela legacy, the July 18 is quite a remarkable day in South Africa: In 2009 it was declared the official Mandela day to honour the former statesman and to encourage people in South Africa to spare 67 minutes of their day and engage in charity work. All this to recognize Nelson Mandela’s fight for democracy and human rights in South Africa, 67 minutes to recognize Mandela’s 67 years of work for the community.

And over the country school children are singing a synchronised “Happy Birthday” like in Johannesburg: